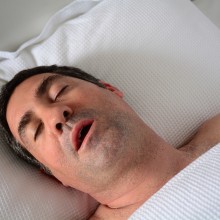 Uyku Apnesi
Sleep apnea is the most important disease among the diseases that cause sleep disorders in adults. An interruption of breathing during sleep for more than 10 seconds is called apnea. The condition of low respiratory rate is called hypopnea. If the interruptions of breathing during sleep last totally more than 5 hours per night, it is a condition called ‘obstructive sleep apnea syndrome’. During the apnea, the blood carbon dioxide level increases, while the blood oxygen level decreases. Prolonged apnea may cause this decrease to reach a serious degree. The number of heartbeats per minute decreases, and the cardiac rhythm may become irregular. This condition causes an increased risk of heart attack and heart failure.

The disease is important because it progresses insidiously and may cause bad outcomes to an extent that can lead to death. The quality of life of patients with sleep apnea deteriorates. They may fall asleep anytime, anywhere, and even at the wheel. Intense snoring disturbs the person/people sharing the same environment. The sound is so high that sometimes he wakes up due to the noise of his own snoring. He goes to work tired, and has difficulty in focusing his attention. He can no longer enjoy working. He turns home so tired, and falls asleep while watching television. His communication with his family and acquaintances gets impaired. Untreated sleep apnea causes the person to be included in the high-risk group in terms of hypertension, infarction, and heart rhythm disorders. It also increases the risk of having a traffic accident.

Sleep apnea is curable. The main problem is its diagnosis. It has been estimated that 80-90% of sleep apnea patients in the world have yet to be diagnosed with the disease; and the ratio is believed to be 95-98% in Turkey. In the United States, sleep apnea patients are diagnosed with the disease after they live with it for a period of 10 years, on average.
Narrowness in the upper respiratory tract causes sleep apnea. It is more common in overweight people and in those who have a short and thick neck. Sometimes drugs used and the anatomical disorders in the face can be a cause for apnea. Narrowness can be caused by;

In cases of mild sleep apnea, the patient should be followed-up by a dietician if obesity is in the foreground. If there is a significant anatomic narrowness in the upper respiratory tract, the condition should be evaluated by an otorhinolaryngologist, in terms of surgical intervention.

In patients with mild to severe sleep apnea, Continuous Positive Airway Pressure (CPAP) therapy should be administered. The patient should be followed up by making adjustments in automatic settings, or starting the use of constant-pressure devices, depending on the treatment’s effect and the patient’s preference. In patients with difficulty in using a CPAP device, or in mild cases, the lower jawbone can be position forward, using an in-mouth appliance, so that the tongue does not falls back and block the upper respiratory tract.

Another procedure performed on inoperable patients or those who cannot get favorable result from surgery is the use of the device called CPAP that has a very high percentage of success. This device allows for respiration with compressed air delivered through a mask worn during sleep. Respiration with compressed air prevents narrowing of the airways during sleep. Almost all patients reap the benefit of this device. The disadvantages of CPAP include the necessity of wearing a mask, its high cost, and its noise that disturbs the patient.